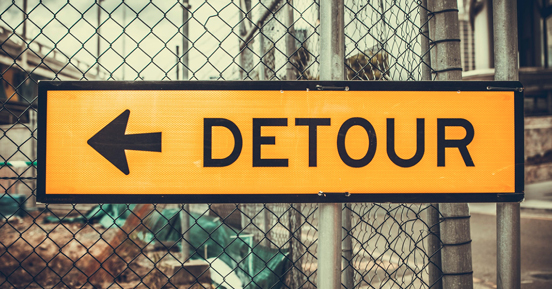 Canada’s Economy Might be in The “Detour” Longer Than Expected

The Canadian economy continues to struggle with its recent slowdown, and signs of recovery remain elusive. GDP fell once again in the fourth quarter of last year, in part due to a slowdown in the energy sector, which cut down on oil production. Other factors include lower household spending and reduced exports, as well as uncertainty surrounding the trade war between the US and China.

The Canadian economy is at its weakest since 2016, as Statistics Canada reports that the annual pace of economic growth was just 0.4% in the final quarter of last year. The gears are indeed grinding to a relative halt in the Canadian economy, with 1.8% total GDP growth in 2018 compared to a 3% rise in 2017.

Some economists predict that the first quarter of this year will be worse than the fourth quarter of last year, because of restrictions on oil production from Alberta. Weakened oil prices and a lack of certainty in the energy sector make a quick recovery seem like too much to hope for.

Nathan Janzen, senior economist at the Royal Bank of Canada, gave his prognosis. “It looks like a lot of the weakness can be attributed to softening of the oil patch,” he said. “If you’re the Bank of Canada, it’s another reason to hold off on raising interest rates for a while.”

And indeed it has. The Bank has decided to keep the interest rate at 1.75% and continue its other efforts to find a way out of the current slowdown. “Although we figured the economy was in for a detour at the end of last year, that detour may wind up being longer than we had expected,” Lynn Patterson, the deputy governor of the Bank of Canada said.

Businesses have to wait until April 24 to see what the Bank of Canada will do next in terms of the interest rates. Canada’s situation, however, does not exist in a vacuum – and it is not the only country to see its business community grow hesitant.

According to a statement by the Bank of Canada, the fault lines in the global economy are “more pronounced and widespread” than forecasts had suggested. Tensions between several nations have caused a slowdown in trade, and Canada’s recent involvement in US-China tensions may bring yet more consequences.

Last year’s controversy involving Huawei is still causing ripple effects. Meng Wanzhou, Huawei’s CFO who was arrested in Vancouver last year, is now suing Canada over its accusation that she had violated Iran trade sanctions, leading to her imprisonment. This ongoing controversy may contribute to a change in the trade relationship between Canada and China. Meanwhile, the trade conflict between China and the US continues to shake the world economy.

And so Canada’s long winter continues, at least for now. Glimmers of hope remain, but have yet to be entirely capitalized on. The replacement deal for NAFTA seems to be in place, and Canadian companies are well placed to trade with an American economy that is still performing well. Tax cuts for businesses may be on the horizon also, and the country’s transition to a more complete digital economy is expected to pay dividends when it is fully up and running.

Until then, however, the belts will continue to tighten and many Canadians will need to summon their patience as they wait for the coming of spring.